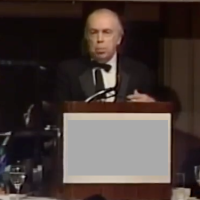 The Right needs a new birth of activity—and the plan has already been laid out by the late, great Stan Evans.

The late M. Stanton Evans—after William F. Buckley, Jr., the second-most important of the founders of the modern American conservative movement—famously had “Six Rules for Political Combat.” He had noticed—and you can see it today, too—that the Left had a standard drill for every issue. Their activity was not aimless.

The drill is, roughly: build up alarm about some menace; cite “studies” or “science” or “experts” most laymen can’t understand or check; get your guys to hammer on the issue mercilessly; and finally, when the public is scared out of its wits, move to do whatever was desired to begin with.

One of those blitzkriegs has been started recently against Justice Clarence Thomas and, eventually perhaps, against the Trump appointees to the Supreme Court. A few weeks ago, Jane Mayer, a hit-piece writer for the New Yorker wrote, “The claim that the Justices’ opinions are politically neutral is becoming increasingly hard to accept, especially from Thomas, whose wife, Virginia (Ginni) Thomas, is a vocal right-wing activist.” That’s just balderdash, of course, but there it is—in print!

The Left, having “lost” the Supreme Court when Donald Trump was president, is frantic to neutralize one or more justices so the court won’t be able to overturn decisions like Roe v. Wade, which the Left thinks are their birthright. Mayer writes that the court “appears likely to secure victories for her [Ginni Thomas’] allies in a number of highly polarizing cases—on abortion, affirmative action, and gun rights.” Yup. It sure does.

Then, a few days later, in a Washington Post article headlined “Clarence Thomas and the gray area of recusal,” Michael Kranish wrote:

Ginni Thomas’s name stood out among the signatories of a December letter from conservative leaders, which blasted the work of the House committee investigating the Jan. 6 insurrection as ‘overtly partisan political persecution.’

One month later, her husband, Supreme Court Justice Clarence Thomas, took part in a case crucial to the same committee’s work: former president Donald Trump’s request to block the committee from getting White House records that were ordered released by President Biden and two lower courts.

Thomas was the only justice to say he would grant Trump’s request.

On February 2, the New York Times weighed in with a long smear job titled, “The Long Crusade of Clarence and Ginni Thomas.”

Here’s one of the key sentences: “And with Trump’s three appointments reshaping the Supreme Court, her husband finds himself at the center of a new conservative majority poised to shake the foundations of settled law.” You gotta love “settled law.” The Left dresses up a few liberals in black robes who then decide matters against the will of the majority and those rulings become—presto!—“settled law.”

The Times quotes a source (so the Times won’t have to take any blame for inaccuracies) that details “the extent to which Justice Thomas flouted judicial-ethics guidance. . . .” This is getting serious.

So, the Left is building up alarm over a new menace. But of course they need experts to weigh in.

In his Washington Post article, Kranish provided one: “‘I absolutely do believe that Clarence Thomas should have recused [sic] from the Jan. 6 case,’ said Gabe Roth [who needs to brush up on his English skills], executive director of Fix the Court, a nonpartisan advocacy group, who called the Supreme Court ‘the most powerful, least accountable, institution in Washington.’”

What is “Fix the Court”? Who knows? There’s almost no information about the organization available, even on Google—or is it “especially on Google”? But the Post assures us Fix the Court is “nonpartisan.” And obviously, Fix the Court folks are experts, so we’d better pay attention.

Step three in a typical campaign is to bring forth a crew of activists to hammer the point: “Isn’t Justice Thomas just awful, and selfish too?!” It’s a good bet we’ll be seeing that next, from talking heads on the (failing) Lib-Dem-Woke media outlets.

And then, step four, someone will propose legislation. How about a committee of experts (is there any other kind?) to recommend which justices should recuse themselves and from which cases? Of course, the justices are extremely unlikely to pay any attention to the recommendations, but that isn’t the only point of this exercise.

The Lib-Dem-Woke activists want to rile up the public and then run on the issue of biased Supreme Court justices. This could be an evergreen strategy, but it is especially crucial this November when the Democrats have nothing else to run on. And of course they want to delegitimize the Supreme Court, and its decisions, now that it has a conservative majority.

Why doesn’t the Right play that game?

Evans had six rules, which you will find listed in Steven Hayward’s excellent M. Stanton Evans: Conservative Wit, Apostle of Freedom, due out this month from Encounter Books. The rules are:

1) Politics abhors a vacuum. It’s important to beat the Lib-Dem-Wokies to the lead.

2) Write the resolved clause. That is., know what your goal is before you begin your campaign.

3) Nothing is “inevitable.” Don’t let the Lib-Dem-Wokies spread doom and gloom among conservatives by convincing them that the Lib-Dem-Woke program will be adopted anyway, so they might as well give up now.

4) Fighting is better than not fighting. Even if conservatives lose a particular battle—no one wins every battle—fighting makes even victory for the other side more expensive (first rule of economics: all resources are scarce).

5) Washington is not America. Just because “everyone” in Washington thinks something, it doesn’t mean that’s what America is thinking.

6) Taxes are trumps. Americans still pay bills, and the bill they least like to pay is the tax bill (they know much of it is pork and is wasted). Democrats exist to spend other people’s money.

A good project for a big conservative foundation would be to award a prize (the “M. Stanton Evans Prize”?)—no, make that five prizes, of tens of thousands of dollars each—to those think tanks that best start and execute a Stan Evans operation.

This is a good year to begin, when Joe Biden’s ratings are almost as low as the recording devices go (and he has the media with him!). The conservatives, and the republic, need a new birth of activity. And the plan has already been laid out for them by the late, great Stan Evans. 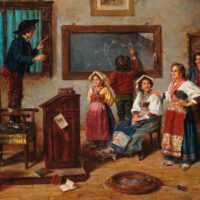 The privileged students are too economically untutored to know their favorite Martin Luther King, Jr., quotes make the man look stupid. But that was the least of their problems.

A place we will call “Hedgefund Academy” (boarding tuition: $64,800) is a tony New England prep school we have visited before. Recently, the school invited Philip McAdoo, a self-described black queer man from the South, to speak in honor of Martin Luther King Day. The mind reels. McAdoo spoke to the students online, but before he did, three students read their favorite Martin Luther King quotes.

Student one—we’ll call him Aaron—picked this one: “We have deluded ourselves into believing the myth that capitalism grew and prospered out of the Protestant ethic of hard work and sacrifices. Capitalism was built on the exploitation of black slaves and continues to thrive on the exploitation of the poor, both black and white, both here and abroad.”

Student two—we’ll call her Bebe, and she was quick to announce her pronouns—said this was her current favorite MLK quote: “Call it democracy, or call it democratic socialism, but there must be a better distribution of wealth within this country for all God’s children.”

Student three—we’ll call him Cici, but he identified himself as co-head of the Latinx club at Hedgefund, which requires a diversion. “Latinx” is how the wokerati refer to people of Latin American culture or ethnic identity (while at the same time patting themselves on the back for being so sensitive). But the good people at the Pew Research Center tell us that “Latinx” (a fabricated term with no basis in ethnicity, culture, or race) is used by only three percent of Hispanics, which means that people who used “Latinx” are only virtue-signaling to each other. Cici picked this quote: “And one day we must ask the question, ‘Why are there 40 million poor people in America?’ And when you begin to ask that question, you are raising questions about the economic system, about a broader distribution of wealth. When you ask that question, you begin to question the capitalistic economy. And I’m simply saying that more and more, we’ve got to begin to ask questions about the whole society. . . .”

The students are too economically untutored to know that their favorite MLK quotes make him look stupid. But that was just the beginning.

Then one of the students introduced McAdoo: “Doctor Phillip McAdoo is an educator, author, activist, and former Broadway actor currently serving as vice president of the DEI [diversity, equity, and inclusion] at Earthjustice, an environmental law organization. As an activist, McAdoo fiercely advocates for the rights of LBGTQ youth, families, and educators. He joined politicians, civil rights activists, and Representative John Lewis (D-Ga.) in support of Every Child Deserves a Family Act, congressional legislation that would lower some of the barriers faced by LBGTQ couples who want to adopt children from foster care. Dr. McAdoo specializes in character development particularly from the perspective of diversity and inclusion. He’s a proud father, and author of two books: Every Child Deserves and Independent Queers: LGBTQ Educators at Independent Schools Speak Out.” On the cover of Every Child Deserves, it says, “Written by Zaden and his two Dads.”

Again, the mind reels—comforted, perhaps, by the knowledge that the $64,800 tuition is coming from someone else’s bank account.

Where to begin? At the top. King was a brave man, and he could speak eloquently, and he was an inspiration to many. But he was young (39 when he died) and he was not an economist: he was neither tutored in nor experienced in economics. His woeful ignorance is displayed, painfully, in the quotes the Hedgefund students read—and it’s embarrassing. King was also not a student of music. And it would seem equally strange if, on Music Day (is there one?), students were to quote King’s critiques of Bach, Beethoven, and Brahms.

What’s the explanation for McAdoo? Maybe he’s just responding to market forces. Maybe McAdoo’s just a charlatan who’s found a gig: persuading guilty rich white people to fly him around to pontificate on racism and discrimination. Predictably, very predictably, he praised the “beautiful” summer of 2020—you remember, the one during which at least 18 people were killed in riots, and which caused more than $2 billion in property damage. Verrrry beautiful. Still, you wonder.

Blacks in America, although they have made great progress, still have great problems decades after King’s death. The nightly slaughter in Chicago—of blacks, by blacks—is an embarrassment to a civilized nation. The out-of-wedlock birth rate among blacks is now 77 percent, which almost guarantees poverty for most of them, and crime for many young men growing up without fathers. Given that illegitimacy rate, who could possibly expect “a better distribution of wealth within this country for all God’s children”?

McAdoo’s bag is not economics but homosexuality, which affects about 4.5 percent of the population. If the problems that blacks face are really as terrible as the quotes selected by the “Hedgefund” students suggest, why is McAdoo wasting his time trying to normalize the abnormal.

It’s easy, and tempting, to blame the students for being so tone-deaf, and so economically clueless. But it’s mostly the adults’ fault: the faculty who teach them and the parents who entrust their kids to that faculty.

February is Black History Month. How will McAdoo ever keep up with the demand for woke speakers at tony schools—assuming they’re allowed to be open? And who will be invited to speak next at Hedgefund?