For the term "human events". 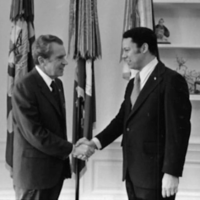 The most disturbing statistic for Democrats must have been the increase (of about 2 to 4 percent) in the share of the black vote received by Trump in 2020.

General Colin Powell, former chairman of the Joint Chiefs of Staff and former secretary of state, is one of the most prominent African Americans in the United States.

Powell criticized Donald Trump in 2016 and voted against him. He then criticized Republicans for “putting political interests ahead of the interests of Americans,” and in 2020 voted for Joe Biden, even endorsing Biden at the Democratic National Convention. Given the closeness of the vote, Powell’s endorsement makes him not insignificantly responsible for Biden’s election.

It’s true that Biden campaigned as a moderate, but it’s also true that someone like Powell must have read about the Hunter Biden laptop scandal and the likelihood that Biden and the Biden family are corrupt.

We all make mistakes: Powell seems like someone big enough to admit he made one, unless he prefers Biden, now, to Trump, even though Trump’s policies produced the lowest unemployment for blacks ever, a policy success which might be said to be in the interest of all Americans, not just those belonging to the party that produced those results.

What is Powell thinking now? And what was he thinking all during the summer of 2020 (before the election) when American cities were burning in post-George Floyd riots choreographed by Antifa and Black Lives Matter amid the deafening silence of the Democratic Party in general and Joe Biden in particular?

Why is this influential black man silent on “antiracism”? And the 1619 Project? And on “equity”—this administration’s watchword? And on what looks like an attempt to purge the military of “white supremacists,” i.e., people who voted for Donald Trump?

Years ago, the civil rights movement was hijacked by homosexuals who, cleverly and successfully, equated being homosexual with being black, and demanded all the protections and benefits blacks were entitled to under the Civil Rights Acts.

Some will disagree that being homosexual is different from being black. But only about three and a half percent of people identify as homosexual, and that alone makes them different from blacks. If there were a homosexual gene (there isn’t), and if it could be turned off before birth, how many prospective parents would choose not to have it turned off? Exactly! Being a homosexual is not the same as being black, raising the question: where was the black community in resisting the comparison to, and the hijacking of, the civil rights movement by the homosexual community?

And where was Colin Powell?

It’s an important question because the black community is being used again, this time by anarchist Democrats (the kind who run the party and pontificate on network news programs) who seek to destroy American traditions—and, likely, America itself, along with them. That’s what critical race theory, the 1619 Project, and “equity” are all about.

The Biden victory—assuming (but not asserting) that it wasn’t stolen—was a close call. The most disturbing statistic for Democrats must have been the increase (of about 2 to 4 percent) in the share of the black vote received by Trump in 2020. That was a call to action for Democrats, and the action we have seen and are seeing is an attempt to convince blacks that Republicans are racists. Hence the absurd claim that Georgia’s new voting laws are irredeemably racist, even though they are now more “liberal” than those in Biden’s home state of Delaware. Even so, such sensible voting laws are described by Democrats as the greatest threat to the country since the Civil War.

And according to Jack Posobiec at Human Events, the Department of Justice is now claiming that inner-city violence is caused by white supremacist ideology, racism, and police. These people are trying to start a race war in order to preserve their power, as they are trying to preserve their power by opening the border to hundreds of thousands of illegal immigrants who will become dependent on government largess and, Democrats hope, supporters of their party.

Meanwhile, the military seems to be going woke. Earlier this year, the administration issued an “Interim National Security Strategic Guidance,” which mentions such “military objectives” as combating climate change and racial injustice. The military has also been launching diversity, inclusion, and equity initiatives. What that has to do with beating the Chinese is unclear.

Two Republican members of Congress, Senator Tom Cotton (R-Ark.) and Representative Dan Crenshaw (R-Texas), have launched a new initiative to eliminate “woke” training programs in the U.S. military, and both have places on their websites where military personnel can report, anonymously, examples of woke indoctrination in the armed services.

Now the military is considering requiring soldiers to be vaccinated, although young soldiers have about as much risk of dying from the Wuhan virus as from overdosing on brownies. Why isn’t Colin Powell protecting soldiers who don’t want to take the risk of vaccination for no health gain?

Powell may have no obligation—or may have had no obligation—to wade into any of these issues, but he has waded into them by opposing Trump and supporting Biden. If he is opposed to critical race theory, and the 1619 Project, and the “equity” project, and a woke military, and rampant illegal immigration (the five horsemen of the Democratic Party’s apocalypse) he should say so. His silence on the issues will be deemed consent to their goals. In that case, he likely will be, and should be, left behind by all of us, and especially by the black community, which less and less often shares the goals of the Democratic Party, so busily now returning to the racism of its past.

Where is Colin Powell when his country needs him?